When fly fishing a well-known river venue for trout, you might be surprised at how many fish are just hanging out nearby waiting for you to leave. Trout at popular venues become acclimated to the presence of people and have learned that if they hunker down and don’t feed for a moment that the threat will leave.

Well, if you’re not catching fish and you don’t see any fish activity, you will probably leave. Right? On less known river venues, wild trout seldom see people and they’re very much afraid of us. Wild trout will scatter like mice when you approach the water. They skedaddle making zigzags running over each other to get away.

That behavior doesn’t occur for trout at a high-use venues. There are a lot of reasons for this tolerance, not solely due to the fish being used to people. A significant factor may be that the heavily fished venue has a limited extent.

Fly Fishing for Trout in Streams and Rivers

Tailwaters below dams are one of these shorter runs. Trout in a tailwaters may not have anywhere to flee. Some habitats may only be a mile or two long. The trout has learned that there are humans both upstream and downstream. They have learned that if they just hang out and don’t feed for a while, you will move on. That is an educated fish. Hang tight. Trout will get used to you and start feeding again if you are not splashing around and alarming them.

Trout notice things and they remember events, both good and bad experiences.

In our region, (South Park, Colorado – a 9,000 feet high altitude basin between mountain ranges), we have multiple Gold Medal waters. Two of these areas are “tailwater” systems – places where the spillway below a dam drains from the bottom of the reservoir and therefore, is usually of a consistent, cool but not freezing temperature and is well oxygenated.

The most significant aspect of a tailwater that never freezes, is that the aquatic insects are constantly engaged in their life-cycle of reproduction and generating more pupae1 or nymphs, which are a trout’s main diet.

Mysis shrimp2 and / or scuds3 (crustacean species of tiny aquatic animals) are often artificially introduced to tailwaters by state biologists to provide super enriched nutrition (power food) for sustaining huge trout. The spillway area provides the cool temperature and elevated oxygen levels (water flowing and frothing down a spillway picks up free oxygen as it splashes) and the resultant freshwater crustaceans thrive year-round.

These two particular crustacean species are commonly added to tailwaters in order to feed the growing population of fat trout that live like couch potatoes at spillways. Crustaceans and abundant pupae and nymphs are why trout get so big in a tailwater.

1. Did you know that the insects you see swarming over the river have been living in the water as pupae for maybe a year or more? The adult stage is so short that some species don’t even have functional mouths in the adult form!

2. Mysids are not true shrimp. They don’t have a free-swimming larval phase. Female mysid carry up to 30 developing young in a pouch at the base of their legs. As soon as the fry develop, they go free into the water and the female prepares a new batch of eggs. Mysis shrimp reach adult size (1 inch) in about 3 weeks, this leads to a new generation being created every 30 days. (Ulrich, III, 2018)

3. Scuds (means “side-swimmers”) are freshwater invertebrates belonging to the order Amphipoda. The name “side-swimmer” comes from the way these animals swim. Scuds are omnivores and eat any organic material they come upon. They live in both flowing and still waters. They crawl at the bottom or swim on their sides. Their body length ranges from 5 – 20 mm (without antennae). There is no separate larval stage – young look like small adults and become sexually mature after growing and shedding their skin several times. (Hamrsky, 2018)

A population of huge trout is how a tailwater becomes classified as Gold Medal or Blue Ribbon, depending on which state is defining the fishery. That is why Joe Schmo needs to know about and look for tailwaters in his region for fly fishing.

If you are ever trapped alive having to stay in a place you don’t want to visit, get a map. Then, look for reservoirs and find out which ones flow from the bottom. Chances are, there may be a fishable tailwaters for you to escape from your situation.

Point being, when you are in a high-use area like a tailwater, the trout are likely to hold in place. They hang out waiting for you to leave because their habitat is a limited area and they have no place to go. Your job is to out-wait them. Take your time. Be conservative in your movements. Have faith: trout are there and you can out wait them. They will resume feeding.

Knowing that trout are hanging out near you is a big advantage. Take time to analyze your vicinity and make a plan.

So, the next time you fish a famous venue known for its fishing pressure, Have Faith: The Trout Are There. 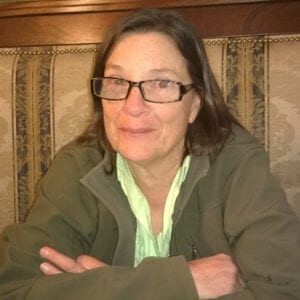 Michele has been writing under her maiden name, Michele Murray, since 2001. She owns Tumbling Trout Fly Shop in Lake George, Colorado, now, and writes under Michele White, her married name. A South Park local, she also is a retired geologist and a contributing editor for Mountain Gazette since 2001.

Camping near Nederland, Rollinsville and Ward, around Boulder County
Next Post: Free Camping In Colorado