Rio Grande Scenic Railroad operates a number of different routes around Southern Colorado. It runs year round, with summer as the peak. It connects the towns of Alamosa, Fort Garland and La Veta, CO.

Train Depot in Alamosa doubles as a Colorado Welcome Center. 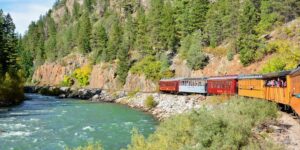 All Aboard these Top Train Rides in Colorado – From utility to tourist attraction, Colorado’s railroad system has seen its share of twists and turns and ups and downs. Today you can tour the same historic routes and remote mountainsides that helped fuel…