The Colorado flag’s history has a vague beginning, but the journey to its modern design proves just how much people love the Centennial State. This flag was thought out very well, from its color choices to its layout.

The Colorado territory was defined on February 28, 1861, although it wasn’t until 15 years later that the land officially became a state. President Ulysses S. Grant gave the stamp of approval to make Colorado the 35th state in the nation on August 1, 1876, a whole century after the USA was born.

To this day, the state borders have remained unchanged since the late 19th century, and August 1 is annually celebrated as “Colorado Day.” On 41 of its entry roads into the state, travelers are greeted by an iconic, “Welcome to Colorful Colorado” sign.

The first state flag was unofficial, consisting of a blue background and a Colorado seal in the center. In 1907, the first “real” flag was designated and very similar to the prior one, with minor modifications to the seal. However, very few people knew that this flag existed.

Unaware that a Colorado flag had already been created, the Denver chapter of the Daughters of the American Revolution (DAR) had a meeting in 1910 to brainstorm a new one. Several designs were submitted over the weeks following this meeting.

Eventually, the DAR settled on one that featured two outer red stripes, one middle white stripe, and the Colorado seal in the center. Despite their best efforts, the flag was disliked by many and declined.

An alternative version was created by Andrew Carlisle Carson, which featured blue stripes instead of red and a red “C” on top of a yellow disc placed on the left side of the flag. This version was much more popular and became an icon for the state in 1911.

The design and colors of Colorado’s flag are filled with symbolism and meaning.

Adjustments Over the Years

Even though the core design was decided in 1911, there was some discussion about the size and placement of the C and the exact hue of the flag’s colors.

The original version of the flag had the C on the left side and was small enough to fit within the white stripe. In 1929, it was decided that the red and blue colors should match the national flag’s shades; however, it isn’t uncommon to see slight variations of these colors.

It wasn’t until 1964 that legislation decided that the diameter of the yellow disc should equal the width of the white stripe, causing the red C to have its distinctive overlapping placement.

Use of Colorado Flag

When living or visiting Colorado, it’s not hard to see the state flag. The Centennial State is the only one in the USA to use its entire flag on the state route markers. Additionally, thanks to its simplistic design, it is often used for hats, shirts, stickers, logos, and home-grown brands. In 2019, Colorado debuted their new state logo, which included the flag in its colorful design and incorporated some green mountains.

The Colorado flag is just one part of this beautiful state’s history, and now you’ll have a better idea of what it all stands for the next time you come across it! 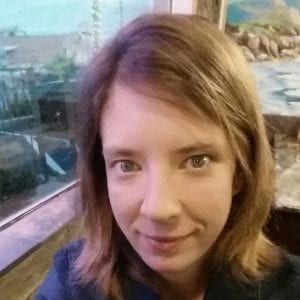 Best Places to Catch a Colorado Sunset
Next Post: Things to do in October in Colorado