For more than 40 years, Casa Bonita has been serving the Denver Metro area its take on Mexican food. The iconic Lakewood restaurant was made even more famous when it featured in an episode of South Park.

The Spanish translation for casa bonita is “pretty house”. It’s considered an “eatertainment” restaurant because its more about the spectacle than the food for its patrons. The restaurant actually got its start as a chain from Oklahoma City, although this Lakewood location is the last that remains.

Opened in 1974, it’s considered one of the country’s top ten roadside attractions, located on the famous Colfax Avenue. Even the building is magnificent, with its pink tower stretching 85 feet tall. The dome is 22-karat gold leaf and showcases a Quahuatomec statue, Aztec’s last emperor. The exterior fountain was sent in pieces from Mexico.

Inside your attention will be immediately drawn to the waterfall. It imitates the cliffs of Acapulco, 30 feet high and the pool below is 14 feet deep. In total there are over 30 attractions, large banquet areas and private dining spaces.

Highlights include gorillas, pirates and gunfights, as well as:

the GREATEST SHOW in Denver

The real treat food-wise is the “all you can eat” sopapillas, which are fried bread served with honey. Before patrons are even given entry to the establishment’s main entertainment and seating area, they order their food first at a counter. In fact, no one can’t get in without buying a full meal, except those under 3 years of age.

Choices are limited between:

Little amigos 12 and under can choose from:

Taste the magic of Mexico! 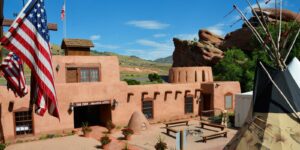