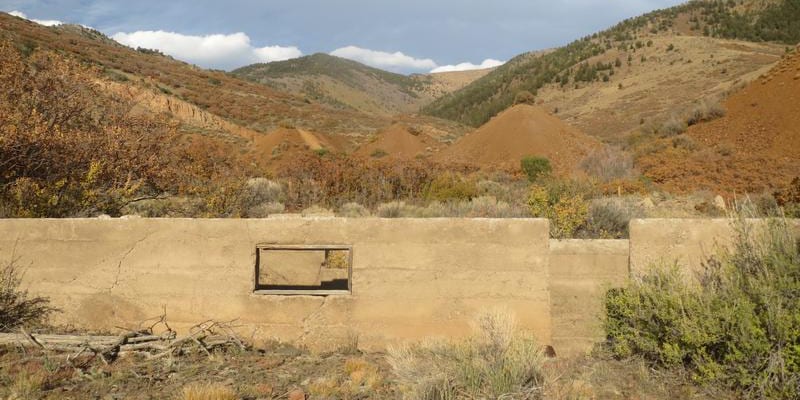 Orient is an old mining town that’s accessed via Valley View Hot Springs. The Orient Mine was discovered in 1870 and quickly became of one the country’s largest working iron ore mines. 400 people resided in Orient at its peak.

Today all that remains of the mine is the Glory Hole and the foundations from the New Town of Orient. It’s accessed through a 2 mile hike to the mine from Valley View Hot Springs. It passes 2 old town sites.

The hike begins at the resort where you can pick up a detailed map of the area and enjoy the hot springs while you’re there. There is a day use fee of $12-$15, depending on season.

Originally named Haumann, after the prospected who first struck iron ore. Miners flocked to the canyons to form what is now Old Orient. In the 1870s it was a rough, remote place.

In 1881 the railroad came through and Haumann leased his claims to Colorado Fuel & Iron. The next year the mine was called Orient. The town bustled until the surface veins of ore depleted in the early 1920s. CF&I decided to give it another chance and built a new company town below the mine.

New Orient prospered until 1932 when the mine closed and the town was abandoned. CF&I stripped the buildings of New Orient of everything but foundation to use the materials elsewhere. At some point after a massive cave-in occurred creating the Glory Hole. Today it’s home to 250,000 Brazilian free-tailed bats each summer.

It’s accessed from the end of the campground at Valley View Hot Springs. You need to pay admission to the hot springs to see it.

Dirt trail back is well maintained.

Foundations are all that remain.

Tripple or "dump track" was used to dispose of tailings.

New Town of Orient was down in the meadows.

Ruins of a well in Old Town Orient.

Old Town of Orient was higher and closer to the mine.