The park was designed by Jason Carey, and consists of one big hole on the left side of hte river, and another standing wave on the right side. When the water is high, the two features often blend into one big wave. River craft who wish to avoid the features can go by at far river right. 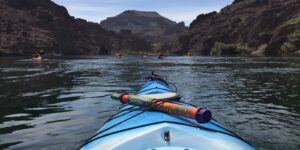 Kayaking the Upper and Lower Colorado River – The Colorado River is one of the most coveted waterways for kayaking and other human-powered watercraft. It’s also a lifeline for millions of Americans and Mexicans. It begins high in the Rocky Mountains of…