There are two things that are absolute must-haves in Colorado: beer and still performing like Lindsay Vonn while drinking it. Believe it or not, there is a way to have the best of both worlds, especially while living in the Front Range.

Craft beer is creating a revolution in Colorado; there are over 50 breweries in the Denver area alone. With this growth in the industry, brewers are becoming more creative and experimental with their recipes, creating brews that are much more than just yeast, malt, hops and water.

Innovative breweries are adding different strains of yeast, bacteria, hops, essential oils, fruits, spices and herbs to enhance the health benefits of their taps. What results is an alternative beer that is far from Coors. It is not calories or lack thereof that makes a beer healthier but rather the quality of ingredients used and the brewing technique that affects how your body metabolizes it.

Here are our top five picks for the areas healthiest beers and their breweries: 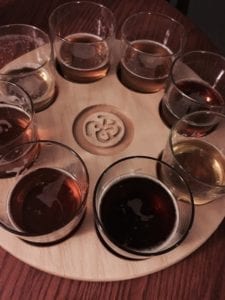 Not only is this beer healthy because it is deeply infused with fresh ginger but every ingredient is organic. It tastes like a ginger beer with a mild pepper flavor, little hops and lots of carbonation making it very refreshing. Chris Asher, owner and founder of Asher Brewing Co, innocently admits to wiping out the entire ginger section of Whole Foods for this beer. Fresh ingredients are obviously a huge priority.

You can feel good about drinking this beer for many reasons. Asher created his brewery to mirror his values in life; sustainability and quality. This beer is crisp yet unfiltered, keeping more nutrients in it. Because the yeast naturally filters the beer, mechanical filtration is unneeded to preserve Vitamin B, specifically B12 to help relieve hangovers. Asher is also 100% wind powered! 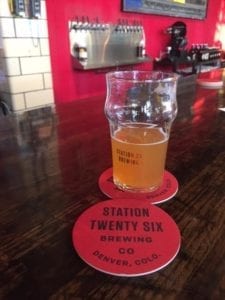 Station 26 won the 2014 GABF (Great American Beer Festival) bronze for this beer in 2014 and now I know exactly why. Colorado Cream is creamy like its name, yet crisp and clear. One reason for this unique taste is the use of mostly brown rice and very little barley in the brewing process.

A fermentation enzyme is then added to reduce the haze and literally eat the extra gluten. The outcome is a gluten- reduced beer that tastes anything but. Also, try this beer with a touch of tangerine. The taproom is located in the Park Hill neighborhood of Denver. 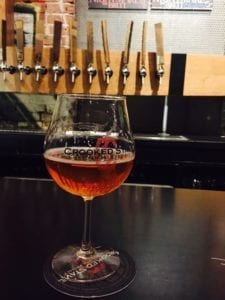 If you think you don’t like Sour Beers, you have obviously haven’t tried the right one. In comes Crooked Stave, a brewery that brews predominantly Sours and a first stop if you are looking for a beer with some very unique properties. We decided to spot light Vieille, a barrel aged Saison with “a tart citrus taste and lemony, lime flavor and aroma from the subtle hops” describes Chad Yakobson, owner and brewmaster of CS. “This beer is right around 100 calories so actually a light beer in nature and from the time it spends in oak aging with brettanomyces and lactobacillus bacteria species it would have all the same health benefits as is claimed by kombucha and only a little bit higher abv.”

Sours naturally have a lower gluten content because of the wild yeast and bacteria that metabolizes the proteins from the malt, making it a little easier on the digestive system. This beer is unique, light and probably unlike any sour you have judged before. 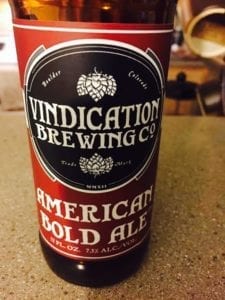 We are sure you know that hops, water, malt and yeast are in your beer, but do you know what else is? This question is why we added Vindication Brewery’s American Bold Ale to the list of more health- conscious beers. Usually, antifoaming agents such as isinglass, which is a derivative from the air bladders of fish, are commonly used in beer to increase the yield in production. Vindication removes that and adds Irish Moss instead, to naturally increase the clarity and quality of their brew.

Hoppy, smooth and slightly sweet, this beer tastes a bit like barleywine and smells of toffee. It’s a little higher in abv, hitting at 7.2%, but definitely doesn’t taste or feel like it thanks to the lack unnatural ingredients. The dedication to detail is impressive and adds to the “brewtegrity” that Vindication prides itself in. 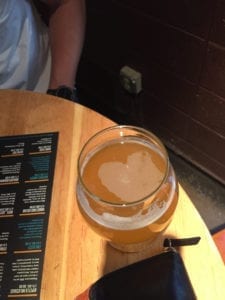 What is a Kolsch and why should you be drinking this one? Mountain Toad describes their Kolsch as “a champagne with a bright, airy, crisp mouth feel and very little hops.” Kolsches use a wild yeast similar to sours and are fermented at higher temperatures and for longer periods of time. This process allows the yeast to eat most of the gluten from the barley. Yes, that means that this beer is naturally gluten reduced, creating a light body and refreshing finish.

Mountain Toad also serves a rotating Kombucha on tap from Happy Leaf Kombucha. Try this beer cocktail with 3/4 Kolsch and 1/4 Kombucha for a fruity infusion.