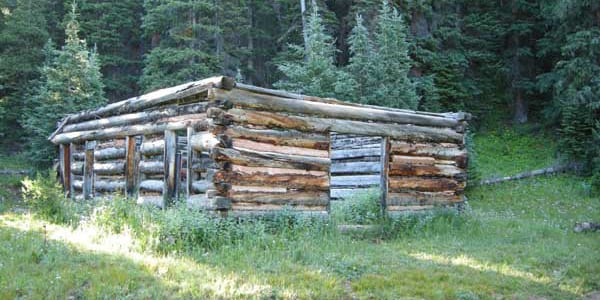 It was named after Methodist minister John Lewis Dyer. Father Dyer founded the town in 1881 when he built his remote cabin on the along Indiana Creek. Soon other miners and merchants from the Warrior’s Mark Mine, which Father Dyer founded, joined him in his quest for riches.

A mill was erected in 1883, soon followed by a railroad spur to haul out the ore. The mine closed in 1908. Due to the town’s high elevation at 10,879 feet above sea level, it was quickly abandoned after mining dried up.

Dyersville is located 6 miles south of Breckenridge in Indian Gulch. Take Boreas Pass out of either Breckenridge from the north, or Como from the south. It’s easy enough to reach with 2WD, however the last half mile stretch is best suited for high clearance 4WD.

The railroad was converted into a auto road open seasonally. A U.S. Forest Service sign “Indiana Creek, Pennsylvania Creed,” lead into the Gulch. Follow from Boreas Pass to Dyersville. It’s situated on the Summit County side of Boreas Pass, closest to Breck. GPS coordinates are 39°25′14″N 105°59′02″W.