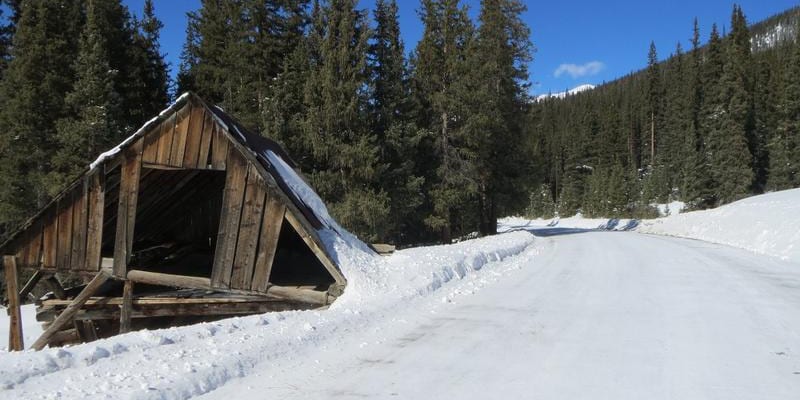 Montezuma is a semi ghost town, with some year round residents and vacation homes. It lies just down Montezuma Road, about 5 minutes from Keystone. Mixed in with the modern lodges and cabins are several ruins, including a school house still used for community meetings.

In its heyday an estimated 1000 people lived in town. When silver prices collapsed in 1893, the population dwindled. Several fires have destroyed many of the historic buildings in town. The 2010 US Census put the population at 65.

Take Highway 6 east from Keystone to Montezuma Road (near the skier parking lot). Take that 5 miles to Montezuma. The road is plowed in the winter, so it’s accessible year round.

2WD is fine to get there, but beyond Montezuma are numerous 4WD roads accessing additional ghost towns. Saints John is a former company town located 2 miles past Montezuma. This odd mining town had a library rather than a saloon. The Wild Irishman is further above Saints John.

Recreation in the Arapaho National Forest is available along much of this valley. There is a parking lot on Montezuma Road at Peru Creek.

Mine in the distance.

Montezuma Road at the center of town.