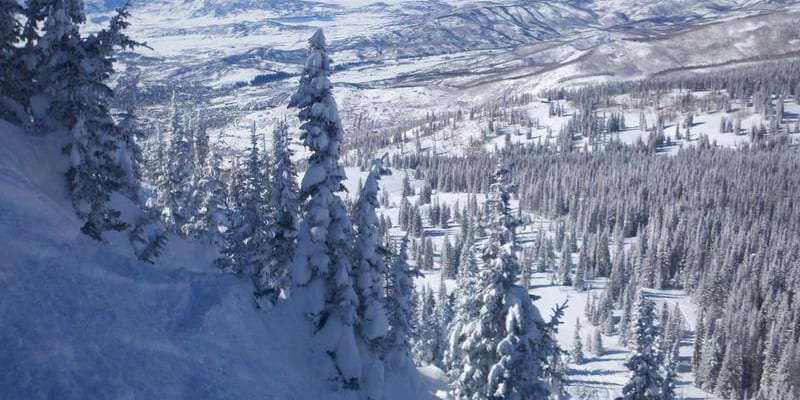 Looking out from the expert chutes off Mount Werner.
1
SHARES
FacebookTwitter

Steamboat is a large, family friendly ski resort that gets over 350 inches of light, dry snow. The resort coined the phrase Champagne Powder to describe the snow they get because it’s dry like champagne.

Offering nearly 3,000 skiable acres, Steamboat has terrain for everyone. And at 3 hours from Denver, Steamboat’s just far enough to keep the lift lines low.

Steamboat has 18 total lifts to navigate around the resort’s 165 trails. From the base you can take a gondola to mid-mountain. From here you’ll have three main choices: ski back down the front side of mountain, go left to Storm Peak, or go right to Sunshine Peak.

Beginners will find a learning area near the base and plenty of greens from mid mountain down.

Intermediates will have a blast on the whole mountain. From the top of all the chairlifts, you’ll always be able to find an intermediate (blue) trail back down. Steamboat grooms a lot of beginner/intermediate terrain every morning, smoothing out the bumps and providing fresh corduroy.

Experts will find most of the advanced terrain above mid-mountain. From the top of either Sunshine or Storm Peak you can head down the backside of the mountain to Morningside. Take this lift to access Steamboat’s legendary chutes, or hike 5 minutes further to the top of Mount Werner.

All the runs from the summit of Mount Werner require a five minute traverse at the end, except for No Names, which leads you to the bottom of the chutes.

The tree skiing is notorious at Steamboat. Almost all of the trees between the trails are open to skiing, and usually hold powder stashes for days. The mountain is a stunning blend of evergreens and aspen. The premiere skiing is Shadows and Closets. Often overlooked are trees off Sunshine Peak between High Noon and Three O’Clock.

There are three terrain parks, varying in size. Maverick’s is the largest and features a Superpipe. There is a beginner park near the Gondola.

Steamboat has both a mountain village and historic downtown. At the base of the mountain is Ski Time Square. This is the heart of Steamboat’s mountain village with lots of nice places to shop, eat and stay. Slopeside Grill and a few other restaurants host live music most afternoons.

On-mountain there are several places to eat, drink and relax. Rendezvous Saddle offers two levels of food courts and fine dining at Ragnar’s. The Gondola Station has a couple restaurants. Grab a Bloody Mary at Stoker’s or get a nice lunch at Hazie’s Fine Dining. The Four Points Hut is usually cooking burgers under Storm Lift chairlift.

​Downtown Steamboat is located five minutes from the mountain. The main street is wide and lined with nice restaurants, bars, shops, spas and lodging. There is a hot springs pool right downtown, the Old Town Hot Springs and a ski area, Howelsen Hill. For a more primitive after ski soak, visit Strawberry Park Hot Springs, fifteen minutes from town. 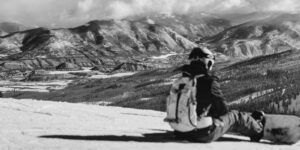 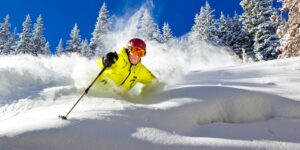 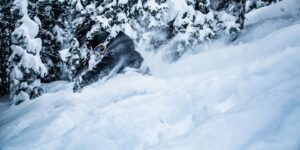 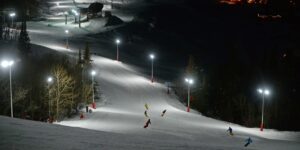 6 Resorts with Night Skiing in Colorado – When the sun goes down, the fun keeps going on some Colorado mountains. Night skiing is available at a number of ski areas around the state. Skiing after hours has its advantages. Lift tickets for night skiing alone are… 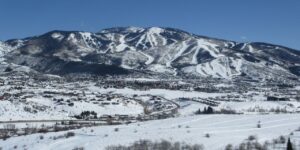 8 Best Ski Towns In Colorado – Epic skiing is synonymous with the Colorado Rockies. And with that comes iconic ski towns. Most of Colorado’s resort towns grew into their role after years as mining campings. These are the best ski towns in the state. Each of them… 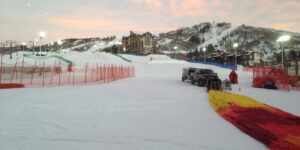 Double Dose of Night Skiing in the Yampa Valley – While Steamboat’s not the only town to boast two ski areas (also Silverton, Aspen, Keystone and Durango), it is the only one to offer night skiing at both of its resorts. You can race down the slopes at the local Howelsen…

November 24, 2011 – Steamboat Ski Resort opened for the season yesterday! Today they had 4 lifts accessing 32 trails. There was enough terrain open, spread over enough of the mountain, that it felt like a lot more.

No matter what time of year, it’s always pleasure to get out and carve a few turns. Even if it’s only few open trails. Generally, Steamboat Ski Resort opens around the third weekend in November, in time of the Thanksgiving holiday. You can usually access at least to the top of the Christy Lift, and if the snow gods have been kind, you’ll reach the top of the Gondola or even Mount Werner.

Here are some photos from our Thanksgiving ski day in the Yampa Valley:

Base view of the mountain.

Heading down to the base.

A run down from the Gondola.

Gondola Station in the distance.

Snowboarder Steve having fun at Steamboat.

Heading down from the Gondola, view of Storm Peak.

Hiking to the top of the Gondola, a long way up.

The terrain park had a few rails, tables, and small jumps.

A Few Days Snowboarding in Steamboat

February 7, 2012 – Steamboat Ski Resort is always a good time. There wasn’t any fresh snow but there were blue skies, groomed runs and not a single lift line.

Pony Express was the only lift not operating, but it opened for the season right after we left town. Two other winter activities in Steamboat include snow tubing and dog sledding.

At the top of the Gondola looking at Storm Peak.

Rudi's Run takes you from the Gondola to Storm Peak/Pony Express.

Morningside Lift heading up to Mount Werner (the top of Mt Werner is actually peak on the right, it's a 5 minute hike).

And down Buddy's Run from Storm Peak Lift.

Steak dinner at the Ore House. The building itself is over 100 years old.

Sushi the next night at Saketumi.

April 8, 2012 – Warm spring skiing and a free Keller William concert made for another great weekend in Steamboat Springs. Despite not being able to ski the lower mountain, conditions were still alright with plenty of long runs open on Storm Peak. Slushies for everyone!

The Preview lift was open for a small run near the base.

Looking at Storm Mountain from the top of the gondola.

Most of the open trails still had good snow coverage.

Choose a path down Chute #1.

Left over the ice to avoid dirt chute #1.

A blue groomer off Storm Peak.

Heading back towards the Gondola.

A mogul run which was avoided.

December 14, 2012 – Early season riding at Steamboat Springs was excellent as usual. Enough of the mountains and lifts were running, that it was great skiing.

I took advantage of Steamboat’s Boat Launch Pass, which was 3 days for $99, to be used by Dec. 14th. Anytime Steamboat offers discounted lift tickets, it’s a good thing. They rarely lower their prices.

Day Three: A big storm rolled into town today and produced many feet of snow.

Riding into the base area.

Some runs on Storm Peak.

Four Points Hut has beer, soup and other concessions.

Skiing down from Four Points.

Need to hit that lip and keep speed up.

Sunset of the Yampa Valley.

Sunset over the village.

Looking up at mid mountain from the base.

Heavenly Daze faces west so it gets all the afternoon sun!

Today a big storm was brewing.

February 10, 2013 – Steamboat is known for it’s deep powder stashes and expansive tree skiing. This weekend Steamboat got around 15 inches, adding to an already deep base thanks to the previous weekend. It was fun skiing and snowboarding all around, with nothing but smiles.

This video is only from a few runs in late afternoon. There’s not much going on, but the views are OK. Anders Osborne is playing at the beginning.

A gondola to start the day.

Some early runs on Sunshine Mountain.

Small crowds for a Saturday.

Rendevous Saddle has a restaurant, cafeteria and bar.

Heading through the baby half pipe, down to the base.

The best way down.

Heading to for a free Anders Osborne concert in Gondola Square.

The 50 is for Steamboat's 50th Anniversary.

Crawfish Boil to celebrate Fat Tuesday in a few days.

Tree skiing next to Heavenly Daze.

A good place to stop.

Looking up at the Chutes.

Fishing for birds on Morningside Lift.

A fat bird at the top says hello.

Still in the trees.

Some booters near the base.

Heading to the trees of Vegabond for afternoon stashes.

Vagajohnny is known for it's high brush.

Sunset over the terrain park.

Some blue groomers near the base.

T Bar for happy hour from 5-7pm. The food is great and served until 5pm.

After a couple pints, it's over to the Ice Castle.

The Ice Castle has several tunnels to in the center.

Since there was no ice bar, it's back to the T Bar. Whoever rings the bell buys shots for the whole bar.

And it gets rung.

The bell-ringer chooses the shot.