Colorado may see 300 days of sunshine annually (more than Florida), but that doesn’t mean the state doesn’t get its fair share of snow. In fact, Centennial State has ranked the 7th snowiest state in the US. As far as when it snows here, it can occur in any given month, however, snow is more likely to be seen from October through April.

When and how much it snows in Colorado depends greatly on location. Cities and towns located in higher elevations, such as Copper Mountain, Twin Lakes, Silverton, and Keystone, will likely see more snow on average. In these mountain towns, the snow may start accumulating earlier and continue later into the season.

The snow-packed Rocky Mountains bring visitors from all over the world to the dozens of ski resorts in Colorado. The most popular months to visit are often the snowiest.

And there are several other snow-fueled activities to do here, including:

What is the snowiest month in Colorado?

The snowiest month in Colorado depends on location, as every town varies. However, March typically gets the most snow, with CBS local reporting an average of 11.3 inches in Denver. April ranks second with Denver reporting around 8.8 inches. The remaining months, according to the National Weather Service, in order of most to least average snow, are:

As for the months with the least snow, July and August typically do not see any. June, very occasionally, can experience small amounts of snow, but on average, the summer months are full of blue skies and good weather.

What are the most to least snowy places?

Some of the Colorado towns with typically the most snow include Crested Butte, Vail, Steamboat Springs, Aspen, and Telluride. Crested Butte, for example, receives the majority of its snow in March (23 inches). Additionally, the town experiences the most snow days, on average, during March (21.7 days), April (21.8 days), and December (20 days), meanwhile, the least is during July.

The least snowy places in Colorado include Grand Junction, Pueblo, Colorado Springs, Commerce City, and Longmont. In Grand Junction, the snowiest month is December with an average of 3.74 inches, followed by January (2.83 inches), and February (2.6 inches). The average number of days for snowfall in December is 6.9 days and 7.9 days in January.

When does the snow start in Colorado?

The first day you’ll see snow in Colorado can vary greatly and depends on the city. For example, the earliest date Denver has seen the first snow is September 3rd, meanwhile, Black Forest and Keystone have both experienced snow as early as August.

While the dates below aren’t a guarantee, as the weather can fluctuate, according to The Denver Post, here are a few of the average first days of snow in Colorado.

Similar to the first snow, the last also depends on where you are within the state. Typically, you can expect fresh powder into April, however, depending on the year and weather, the season could be shorter or longer.

How much snow does Colorado get?

The amount of snow in Colorado, again, depends on location, with higher elevations typically getting more snow than lower ones. As reported by the National Weather Service, the long-term average seasonal snowfall for Denver is 56.5 inches, with a minimum and maximum range of 21.3 inches to 118.7 inches.

Furthermore, as reported by the Colorado Tourism Office, mountain resorts can see more than 300 inches of snow, excluding Aspen, which receives nearly 200 inches of snow annually, according to US News.

However, with frequent mild temperatures, especially at lower elevations, snow often doesn’t last long. For example, while April may be the second snowiest month in Denver, the average high is still 65°. So many times, snow doesn’t last very long as it may in other places. Even the coldest month of December has a high of 46°. 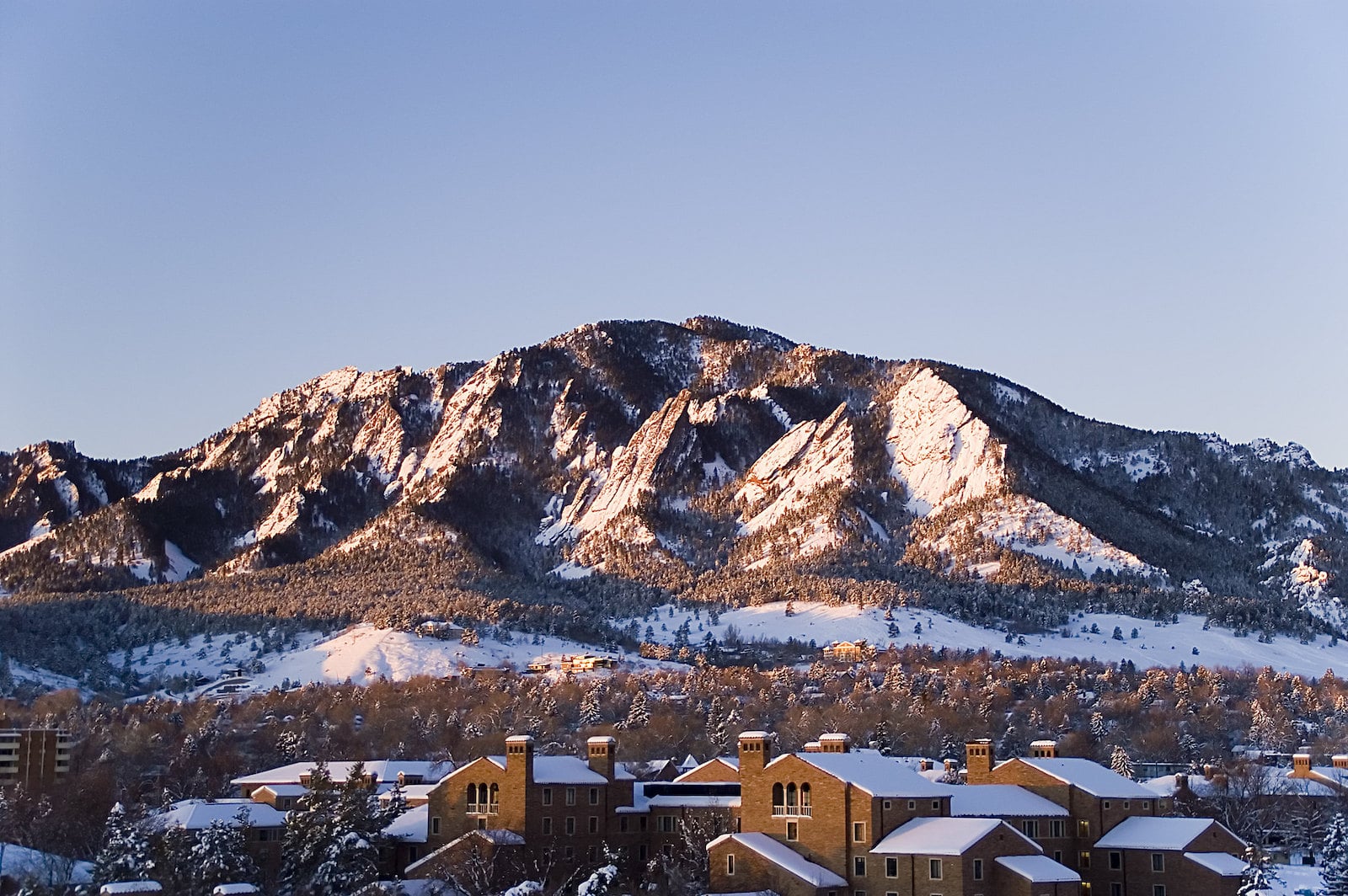 The Flatirons in Boulder after a blizzard. Photo: Michael Buck

So if you’re planning a trip with winter activities, it’s best to check the weather for the specific town you are visiting. While the snow may not fall everywhere, you are almost guaranteed to find somewhere with fresh powder from October to April.

10 Serene Hot Springs near Salida
Next Post: Learn Some Fun Facts about Colorado