Spend any amount of time in Colorado, and you’re likely to come across the term “Front Range” sooner or later. To most Coloradans, the Front Range region conjures images of the state’s biggest cities, an impressive line of peaks, and not much else.

But, in reality, the Front Range covers a whole lot more than that. From quirky mountain towns to some of Colorado’s most impressive natural offerings, there’s lots to explore in this important part of the state. Let’s jump in.

What exactly is the Front Range, anyway? 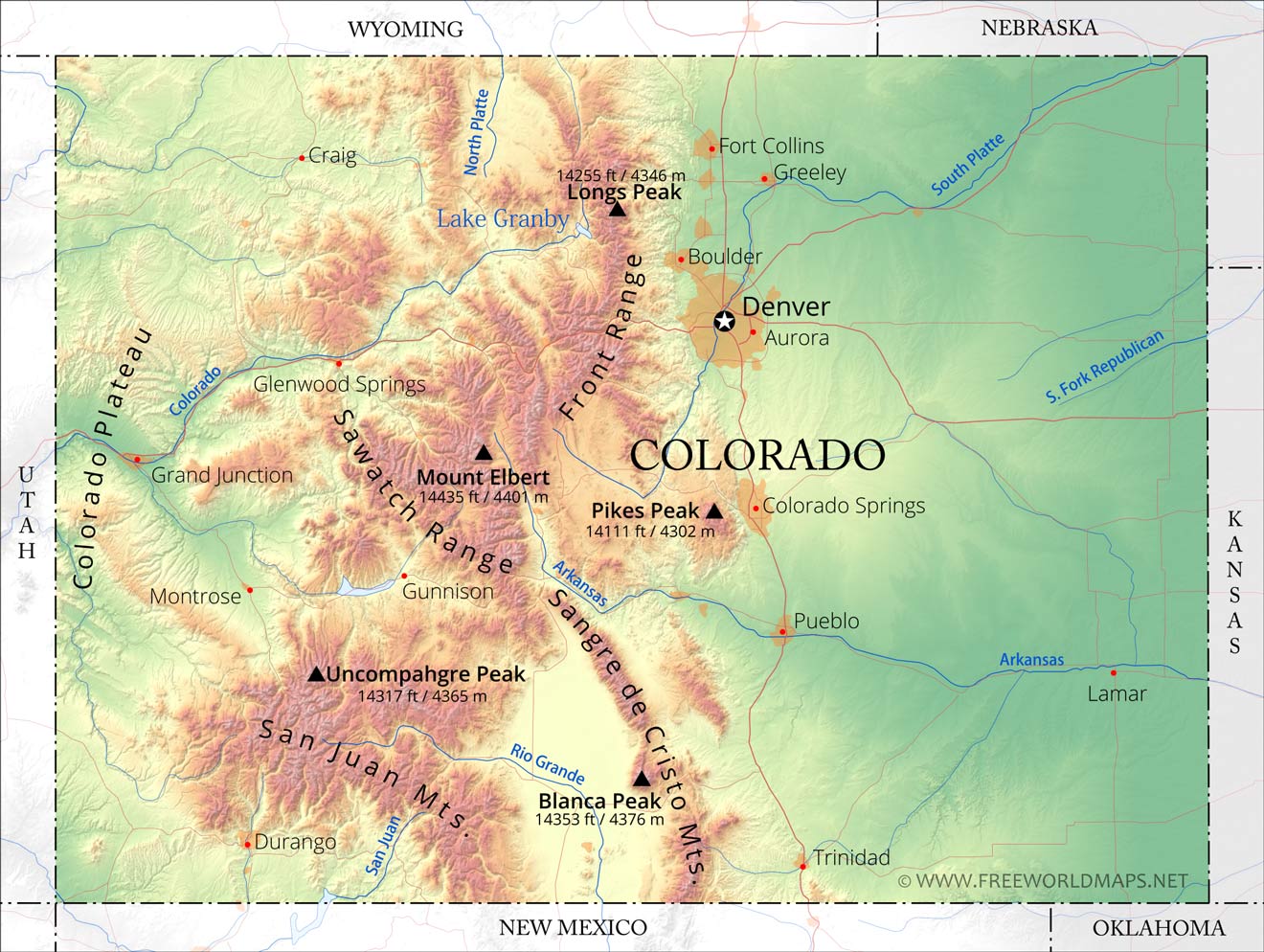 The Front Range is a steep mountain range that reaches down deep into central Colorado from southern Wyoming. For many pioneers who traveled west through the Great Plains, the towering peaks of the Front Range were the first evidence they encountered of the Rocky Mountains.

The Front Range spans from Casper, Wyoming to Pueblo, and extends inward to the Eastern Slope of the Continental Divide. This range includes some of Colorado’s most stunning natural landmarks, including the 14ers seen from the plains, Pikes Peak, Mount Evans and Longs Peak as well as the Royal Gorge and vast forested areas.

The southern counterpart of the Front Range is the Sangre de Mountains, which extend down into northern New Mexico. The Sawatch Range and San Juan Mountains blanket the central and south central regions of Colorado.

The Eastern Slope refers to the mountains east of the Great Divide and includes the Front Range, but also Sangre de Cristo Mountains as well. Rivers and streams here ultimately drain to the Atlantic Ocean. On the opposite side of the Divide lies the Western Slope, which includes the San Juan Mountains and Sawatch Range. Water here drains to the Pacific Ocean.

If you’ve ever enjoyed the mostly moderate weather in cities like Denver and Boulder, you have the Front Range to thank. The immense line of mountains helps block out severe storms, making Colorado’s biggest cities much easier places to live and work in.

The Front Range Urban Corridor holds a dramatically large percentage of the state’s population. Out of an estimated population of 5,842,076, nearly 5 million people are thought to be living along Colorado’s front range.

The Front Range Urban Corridor is home to Colorado’s largest cities like Denver, Colorado Springs, Pueblo, Boulder, and the surrounding suburbs. College towns like Greeley and Fort Collins are also included in the corridor, which extends all the way past the Wyoming border into Cheyenne.

While major Colorado cities like Denver and Colorado Springs tend to capture most the attention when people think about cities along the Front Range, places like Aurora, Longmont, Castle Rock, and Fountain have rapidly grown over the past decade and are working to form separate identities from the large cities they’re tethered to.

This area of Colorado features internationally known destinations like Red Rocks Amphitheater and the Cheyenne Mountain Complex, in addition to a myriad of important cultural and historical offerings associated with Denver, Boulder, and Colorado Springs.

Mountain towns on the Front Range

For many Coloradans living in Denver, Colorado Springs, and Boulder, the Front Range extends only as far their sight of the Rocky Mountains does. But while the Eastern Slope leading up to the Continental Divide has far less of a population than the Front Range Urban Corridor, it’s still very much a part of the Front Range.

From an eccentric town that hosts one of the world’s most bizarre festivals to one of the most important federal institutions in the nation, the Front Range is home to a diverse set of places, and many are far less known than the big cities that line the Urban Corridor.

West of Pueblo on the eastern range of the Rockies, Florence is home to the United States Penitentiary, Administrative Maximum Facility. From terrorists to mobsters to serial killers, the Supermax prison is designed to house the nation’s most violent and dangerous prisoners as safely as possible.

At just over a half hour’s drive from Denver, Evergreen offers a welcoming mountain experience for visitors that includes a large lake that hosts ice fishing and ice skating every winter. To the northwest, people flock to Central City and Black Hawk to gamble and drink in saloons, activities that were also common in 1859 when the area hosted a flood of prospectors during the Pikes Peak Gold Rush.

At the doorstep of the sprawling and majestic Rocky Mountain National Park (RMNP) sits the town of Estes Park, a stellar place to see elk in the fall. Just to the south is Nederland, which hosts Frozen Dead Guy Days, a bombastic festival named after a very real frozen dead guy who resides in the town.

The Front Range is unique for how its ability to offer millions of residents so many recreational opportunities close by. As the Urban Corridor continues to see a remarkable amount of growth every year, this is undoubtedly one of the reasons why.

Patrick McGuire is a freelance writer and musician living in the mountain west.

Legendary 4-Day Road Trip Itinerary through Southern Colorado
Next Post: Does Colorado have any Volcanoes?