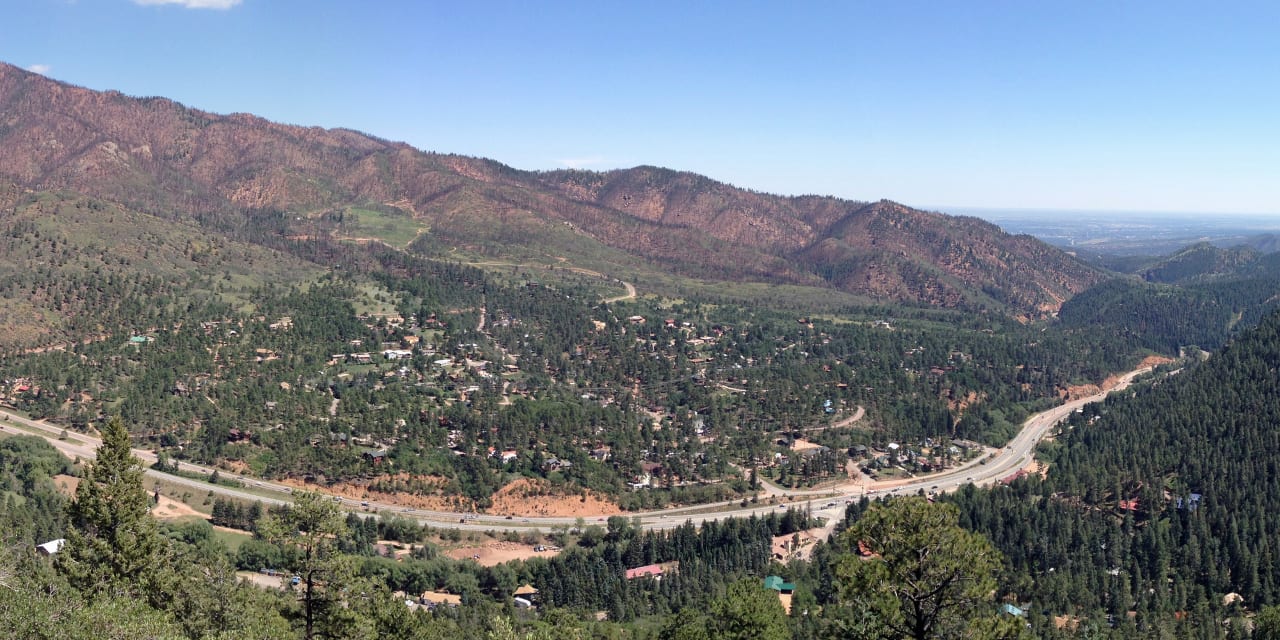 {Aerial of Cascade from lower part of Pikes Peak Highway. Photo: Fredlyfish4} Cascade is a tiny tourist town that sits at the gateway to Pikes Peak Highway. It’s situated in the scenic Cascade Canyon on Highway 24, in a section known as Ute Pass. Its neighbor, Chipita Park, uses Cascade as a mailing address.

The town got its name from the many waterfalls in the area. Cascade Creek merges with Fountain Creek in town.

It was originally a camping spot for Ute Indians and others passing from the Plains to the Rockies. Officially established in 1886 at an elevation of 7,379 feet, Cascade quickly drew in tourists with the building of the Ramona Hotel in 1888. There were three main hotels that operated in town until the 1920s.

Thousands of tourists traveled the Ute Pass via the Colorado Midland Railway. A carriage route up Pikes Peak would pick up passengers at a railroad stop in town. This operated until 1902, but declined in popularity when the Pikes Peak Cog Railway opened in 1892 in nearby Manitou Springs.

When automobiles started traveling the pass in the 1920s, two of three hotels closed because of dwindling visitors to town. The town remains an overnight destination, featuring various B&Bs, inns and cabins.

Pikes Peak Highway – Built in 1888, this toll road is open year round, weather permitting. You can drive your car or take the Pikes Peak Cog Railway in Mantiou Springs, up to the 14,110-foot summit.

North Pole – Santa’s Workshop – Built in 1956, the North Pole is a Christmas themed amusement park that’s open from mid May through Xmas Eve. 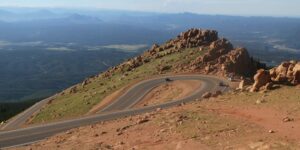 Up, Up, Up Pikes Peak Highway – Any trip to Colorado Springs would not be complete without a visit to Pikes Peak. The road was constructed in 1915 and has been a world-renowned attraction since. An earlier road, the Pike’s Peak Carriage Road… 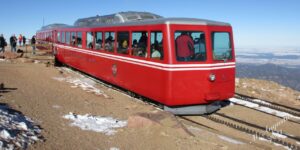 Riding High along the Pikes Peak Cog Railway – All good things must eventually come to an end. With snowpack at most of the Colorado mountains dwindling on non-existent; the ski season is nearly over at almost all of the resorts. In this unfortunate winter…