The diverse Uncompahgre National Forest covers nearly 1 million acres in western Colorado. It’s located to the south of Grand Junction, with a lot of terrain west off Highway 550.

The forests and mountains in southwestern Colorado are spectacular and full of natural marvels, with ample recreation opportunities for every kind of adventure seeker. Parts of the San Juan Mountains and Uncompahgre Plateau are located within this western slope national forest. The Unaweep Tabeguache Byway  is one of several designated scenic routes located within this beautiful national forest.

Rugged, remote, and spectacular, the Uncompahgre National Forest contains some of the most beautiful areas of Colorado. From the roof of the San Juan Mountains at Uncompahgre Peak to the bottom of piercing canyons west of Montrose, the recreational variety makes this area ripe for repeat visits. Parts of the national forest can be accessed from Telluride, Silverton, Ouray, Ridgway, Lake City, Montrose, Delta, and Grand Junction. 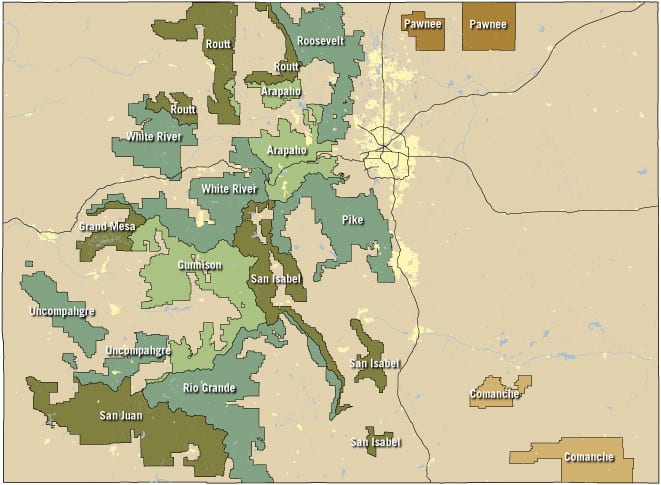 Bordering the Uncompahgre to the south if the San Juan and to the east is the Gunnison, while northeast is Grand Mesa National Forest.

Many road biking options exist in portions of Uncompahgre National Forest, including US550, which can be biked as part of the San Juan Skyway. CO 145 south of Telluride and up Lizard Head Pass is also a regional favorite. Biking on the quiet streets of Telluride, Mountain Village, and Ouray serve as comparably peaceful alternatives to the bigger road options.

For shorter mountain biking routes, check out the trails around the town of Ridgway and the bike park at Telluride Ski Resort. The Black Pine Ridge Loop close to Grand Junction contains moderate loops on well-groomed trails, which are sure to entice novice and intermediate riders.

Uncompahgre National Forest does have some superb non-motorized lakes to explore, like Trout Lake, right off of Lizard Head Pass. Silver Jack Reservoir, tucked into the northern Cimmaron area, is also popular for launching kayaks, canoes, and stand-up paddleboards. The small but beautiful Woods Lake, with direct access to the Lizard Head wilderness, is also a great place to set up non-motorized boating operations.

Typical of this part of Colorado, camping options are plentiful. There are private cabins for rent like the Lone Cone and Matterhorn cabins west of Telluride, Aspen Leaf Cabin, and Silesca Guard Station on the Uncompahgre Plateau, and the Jackson Guard Station in the Cimarron Area.

Popular campgrounds in the Telluride area of the national forest include Alta Lakes, Silver Lake, Woods Lake, Matterhorn/Priest Lake, and Angel Creek/Thistledown. A handful of established campgrounds near Silver Jack Reservoir like Beaver Lake Campground, Big Cimarron, and Silver Jack Campground offer plentiful access to quality recreation. Additionally, along the spine of the Uncompahgre Plateau, Columbine Campground, Iron Springs, and Divide Forks are all well-maintained and ready to receive visitors.

Lake fishing is popular on many bodies of water in the Uncompahgre National Forest. Some of the more well-known locations include Silver Jack Reservoir, Woods Lake, Trout Lake, Beaver Lake, and Big Creek Reservoir.

River and fly fishing are where this national forest shines. You can fish multiple sections of many fast-moving mountain rivers, like Red Mountain Creek, Big Creek on the Uncompahgre Plateau, the Uncompahgre River, various forks of the Cimarron, the Dolores River, and the South Fork of the San Miguel River. Countless additional options exist but require hikes or backpacking trips to reach.

With so many rivers and streams crisscrossing the region, southwest Colorado is an anglers paradise.

Hiking in the Uncompahgre National Forest is amazing. One of the most visible 14ers in the state is Mt. Sneffels, and it can be approached from either Telluride or Ouray. Southwest of Telluride, Wilson Peak demands a committing scramble with astounding views of the surrounding terrain. The gorgeous Blue Lakes are also worth a journey, alongside a trip into Yankee Boy Basin.

The beautiful high-alpine area in the Uncompahgre Wilderness Area is not only a hiker’s paradise but features a species of butterfly found only in the northern San Juan Mountains. The stately Courthouse Mountain is a fantastic hike as well. Gorgeous autumn hikes near the Dallas Divide, Ophir Pass, Silverton, and Red Mountain Pass, are sure to stun with gorgeous mountain valleys painted gold by the turning of the Aspen leaves.

The San Juans are a playground for off-roading, and some of the best routes in the state exist here. ATV rental options abound in local towns like Telluride, Ouray, Ridgway, and Silverton. Some of the more recognizable routes include the moderate Ophir Pass, the harder Imogene Pass, and the highly sought-after Alpine Loop.

The Uncompahgre Plateau area also contains some rugged ATV and OHV routes without the San Juan summer crowds. The Divide Forks ATV Complex at the north end of the plateau and the Thunder Loop trails near the town of Norwood are standout areas. Covering a lot of the same ground as the Paradox mountain biking trail, the Rimrocker Trail between Montrose and Moab, Utah, gives users 160 miles of demanding dirt roads to explore.

There are a few stunning drives through this national forest, chief among them, The San Juan Skyway. This absolute gem of a loop runs more than 230 miles and includes some of the best mountain scenery in all of Colorado. With plenty of places to stay for a night, including in places like Durango, Cortez, Telluride, Ridgway, and Ouray, consider making it a multi-day adventure.

The Uncompahgre National Forest also hugs the west side of the Silver Thread Byway near Lake City, another lengthy and gorgeous mountain road. The Alpine Loop, mentioned above in the OHV section, is also considered a Colorado scenic byway, provided users have off-roading equipped vehicles.

It should come as no surprise that the winter recreation in Uncompahgre National Forest is fantastic. Snowmobiling areas include Old Owl Creek Road near Ridgway and the East Naturita region near the town of Norwood. Cross-country skiing and snowshoe trails abound in towns like Telluride and Ouray.

Speaking of Ouray, the town is world-renowned for its ice-climbing park and hosts the Ouray Ice Festival every winter. As far as established ski resorts are concerned, Telluride Resort is the region’s biggest magnet with tons of terrain, including steeps, chutes, and alpine bowls for experts. Just outside of the national forest boundary, Silverton Mountain also offers skiing to everyone who has proper backcountry gear. Be aware that unguided touring options are only available in the early and late season and only if you show patrol your backcountry gear.

The Uncompahgre National Forest is often the first glimpse Front Range residents get of the San Juan Mountains, and it leaves an impression. Whether you’re frolicking through alpine meadows, summitting any number of exquisite mountains, or getting lost in the massive canyon carved margins of the Uncompahgre plateau, this part of southwestern Colorado has your adventure needs covered.

Telluride is one of Colorado’s most beloved mountain towns and most secluded. Throughout the warmer spring,…