The county seat is Fort Morgan, the boyhood home of Big Band musician Glenn Miller and the burial place of author, essayist, and philosopher Philip K. Dick.
Jackson Lake State Park, with the 2,700 acre Jackson Reservoir in the center, is found in Morgan County. 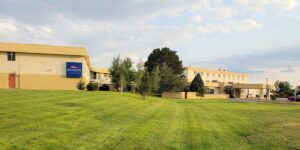